Vassiliki – a windsurfing ‘Mecca’ on Lefkas

Vassiliki is situated on a wide bay on the South coast of Lefkas, and is the second largest holiday resort on the Island. Vassiliki Bay faces South towards Keffalonia and Ithaka, which can be seen in the distance, and has a small ferry port from which you can take a ferry to both of these islands. Vassiliki is 40 km from Lefkas Town (about 40 minutes by car), and 60 km from Preveza Airport (about 1 hour by car).
The village of Vassiliki itself is on the Eastern side of Vassiliki Bay – the Western side of the bay is called Ponti. There is a coast road between Vassiliki and Ponti. The whole area between Vassiliki village and Ponti is flat, and this extends back from the sea as far as the mountains. The area is mainly agricultural except for the area close to the beach, which is developing quickly as quite a lot of new hotels and apartments are built.

Vassiliki beach, for the most part, is pebble and shingle with a few areas of sand such as the West end of the beach in Ponti. Although this is a but hard on the feet it does mean that the sea is crystal clear. The beach is very gently shelving, so is quite safe for children – but parents should still be careful. Because of the large number of people learning windsurfing and catamaran there are set areas for swimmers and windsurfers.

Vassiliki is fairly quiet at the start and end of the summer season, but really comes to life in July and August when it is recognised as one of the windsurfing capitals of Europe. The bay is wide and sheltered, and is noted for it’s afternoon wind known as ‘Eric’. On a good day, the sight of hundreds of windsurfers speeding across the water is spectacular. 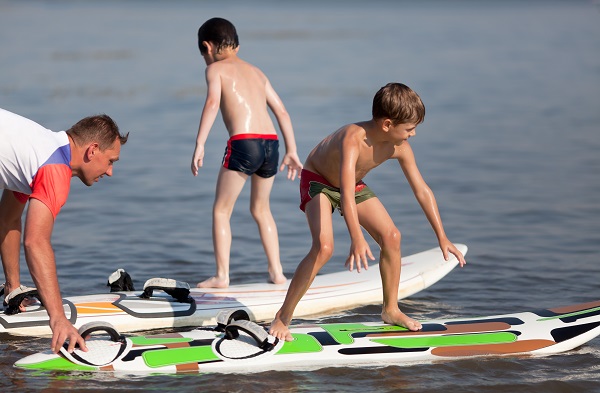 “Why is Vassiliki so popular with windurfers?” we hear you ask. The answer, my friend, is blowing in the wind…

Vassiliki is at the end of a North – South valley backed by a very high south-facing mountain. In the morning the winds are very calm, and the only people windsurfing are beginners who are practicing on their boards. As the sun gets higher and moves south it warms the side of the mountain. The hot air rises and suddenly, in the early afternoon, the wind rises and soon becomes so strong that only experts can surf safely in it. Why is the wind called Eric? Well, that is a question you should ask one of the windsurfers when you get there!

Although there are many things to do other than windsurfing, it is worth trying it for a day whilst you are on holiday. Although many of the windsurfing schools are tied to tour operators there are a few independent schools on the beach.

Children are also welcome to try – you are never too yound to start but if kids are learning in the sea it is better if kids are in their teens and have some confidence in the sea – because when you are beginning you are likely to spend a lot of time falling off the board and having to climb back on again! Ask around for a windsurfing school which is happy to teach kids, and try to book in advance if possible. 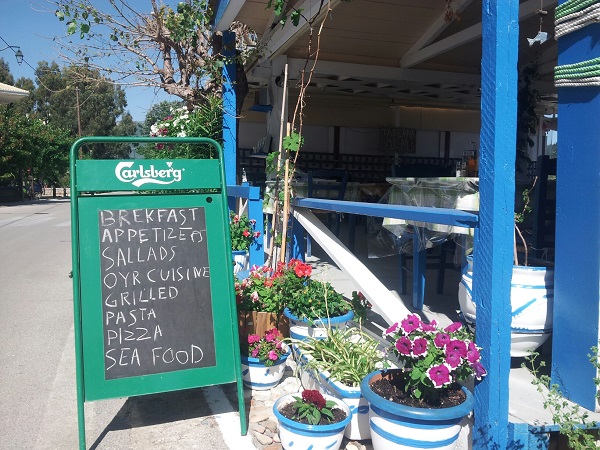 Although Vassiliki does not have the same number of bars and restaurants as Nidri, it’s larger neighbour, the variety and quality is very good. Vassiliki village and Ponti are about 2 km apart and the nightlife is quite different depending on which you go to.

Ponti is much quieter, and really only has a few tavernas and restaurants. But that is not a problem since visitors normally come here because it is quieter and more laid back. The quity can also be better here as well because the owne, cook and waiter are often part of the same family, live locally, and have been running the tavernas for years. So they take pride in their hospitality and the quality of their food.

Ponti is lovely to visit for lunch. There are a few tavernas right above the sandy beach, open to the fresh breeze with spectaculat views across Vassiliki Bay and the windsurfers – a perfect plave to enjoy a Greek salad and a cold beer!

Vassiliki village is much busier, and there is a noticeable difference netween low season and the high season of July and August. Low season is mainly more mature couples looking for a relaxing time. The high season brings a completely dirrerent type of visitor; young windsurfers and families with kids.

The nightlife reflects this and some bars are aimed towards a younger crowd. The restaurants offer international dishes as well as Greek menus.

Restaurants are to be found all over Vassiliki, but the focus of nightlife in the evenings is down by the beautiful harbour in Vassiliki. The tables run right up to the edge of the harbour – so don’t drop your fork! Before choosing where you are going to eat take a stroll along the harbour as far as the ferry port and check the menu boards to choose what you want to eat – and smell the delicious aromas of cooking food coming from the kitchens. Watch the chaos when a fery comes in and a convoy of cars, trucks and buses try to weave through the crowds of pedestrians, heading for homes and hotels. 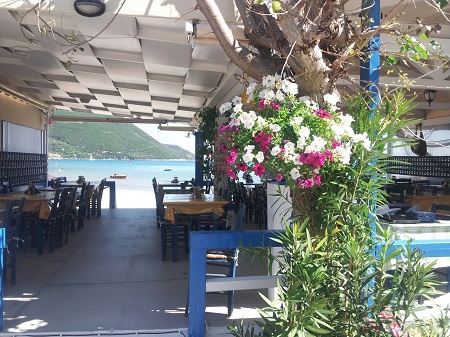 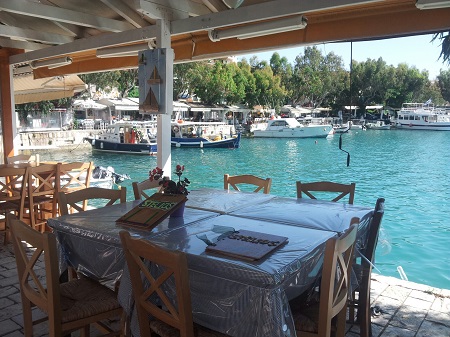 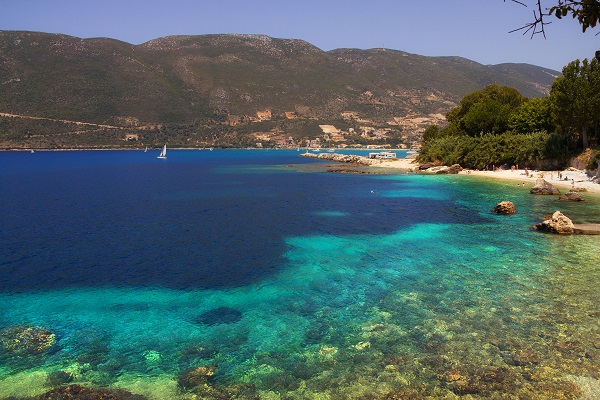 There are a lot of things to see and do around Vassiliki without a car.

There are some beautiful little beaches along the coast from Vassiliki, to the south east, imncluding the beautiful and famous Agiofili. This popular beach can be reached by following the coastal path and tracks, or more easily by local boat from Vassiliki harbour. From here you can also take longer boat trips to other villages, and even around the south tip of Lefkas past the lighthouse to the beautiful beaches of the West Coast.

Why not hire some bicycles and explore the large area of beautiful countryside behind Vassiliki? It is flat and easy cycling, and far away from the beach crowds.

Or, if you prefer trying another island, take the car ferry across the sea to the neighbouring island of Keffalonia and the jet-set village of Fiscardo. Check the ferry times carefully though to avoid being stranded there for the night!

Finally, why not take the local public bus to some of the local villages. To the West, 5 km into the hills, is the good sized village of Agios Petros. Going the other way, on the Lefkada Twon bus, you can stop off at the many mountain and coastal villages along the way. However, same as the ferry, check the return times carefully to avoid having to take a taxi back to Vassiliki! 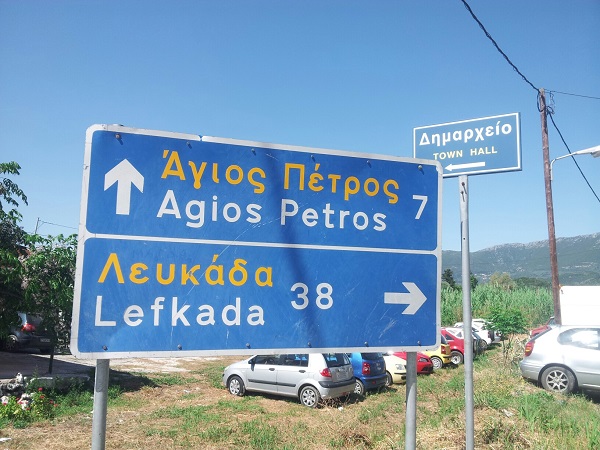 To seriously explore Lefkas island from Vassiliki you will need a car. These can be rented locally, but during the high season especially it is better to book your Vassiliki car hire online in advance.

By car you can explore the fabulous beaches of the West coast; Porto Katsiki, Efremni, Gialos, Kalamitsi, Kathisma, Milos and Pefkoulia. This beaches are all so unique you should really spend a whole day at each! But do you have time?

The viewpoint from the lighthouse and Sapphos Leap share beautiful views and a sad story. On the way the village of Athani is a great place to stop for lunch and buy some local honey and wine.

Driving East you will find the beautiful bay of Sivota, full of yachts. This os followed by Poros Bay with the beautiful and pristine beach of Mikros Gialos.

Finally, less that an hour by car at a gentle speed, is the capital of the island Lefkada Town. 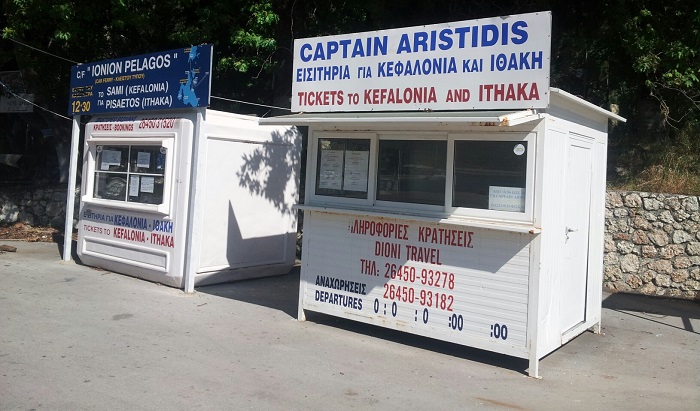 Vassiliki ferry port is the departure and arrival point for ferries between Lefkada, Kefalonia and Ithaka. There is an occasional service during the winter but this becomes much more frequent during the summer.

Ferries from Vassiliki (Lefkada) to Fiscardo (Kefalonia) and Vathy (Ithaka)
The ferry between Lefkas, Fiscardo and Frikes is operated by the ferry boat “Captain Aristidis”. It carries cars as well as passengers. You will find their website at www.westferry.gr or you can telephone their agent on +30 26450 93278

Feries from Vassiliki (Lefkada) to Sami (Kefalonia) and Pisaetos (Ithaka)
This route is operated by the ferry boat “Ionion Pelagos”. They do not have a website but you can telephone their agent on +30 26450 31520

Please note that, with all things Greek, you should not expect an immediate response – especially in winter. If you are contacting them by phone and you do not speak Greek then you will find it better to speak English.

The ferries are VERY busy in July and August and without an advance reservation you might not be able to get your car on to the ferry, so try to book in advance. There is not usually a problem for foot passengers.

Tickets can be bought from the ticket booths (see photo) at the ferry port, which open a short while before the ferry depards.

VERY IMPORTANT: It is tempting to think that flying to Keffalonia airport is an easy route to Lefkada. It is not and there are some risks, especially when you are returning to the airport for your flight home. There are sometimes strong winds and storms from the West, even in the summer. The ferries have flat bottoms and cannot sail in high winds. So sometimes the ferries are cancelled – even up to 3 days! So it is much safer to fly directly into Preveza airport, or else into Corfu airport as the ferry crossing to the mainland is more sheltered.

Hotels and apartments in Vassiliki